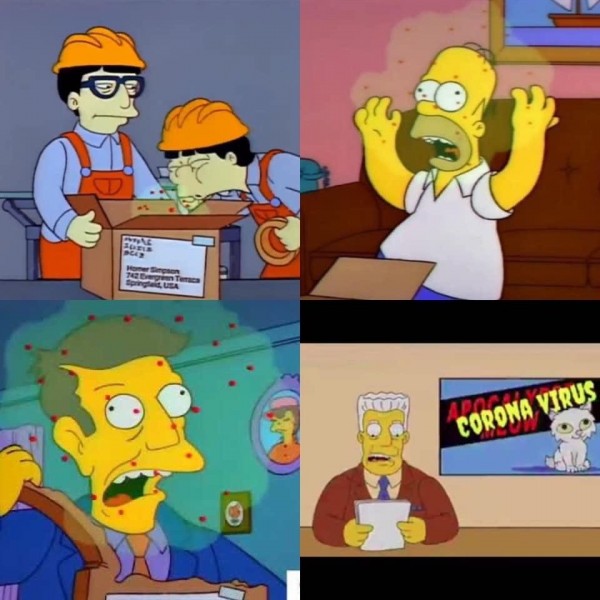 The new conspiracy theory named "Simpsons Coronavirus" is now circulating on all media platforms. Four images snipped from The Simpsons season 4 episode 'Marge in Chains' depicts a fictional global pandemic in 1993. While it first started as a joke online, it soon spread like wildfire with many conspiracy theorists claiming that this is once again proof that the Coronavirus is humanmade.

The episode 21 "Marge in Chains" does not talk about Coronavirus at all, immediately debunking the idea of it being a conspiracy. The episode features a fictional disease named "Osaka Flu."

The Osaka Flu came to fruition when a factory worker in Japan coughed on a package addressed to Homer Simpson. The package was then sent to Springfield, and later, everyone became sick. It then became a pandemic in the Simpsons cartoon world.

According to Reuters, the Simpsons Coronavirus theory has been shared over 18,000 times on Facebook and 5,000 times on Twitter. There is a photo Springfield's anchor Kent Brockman presenting the news of the Osaka Flu in his studio. However, the picture was later edited from Osaka Flu to "CORONA VIRUS."

Oakley was incredibly frustrated with the users' claim, using his work in an edited collage that is false. The episode, which he wrote with Josh Weinstein, was based on an epidemic that took place in the same century.

His statement immediately removes the idea of the episode being a prediction.

The Truth About the Episode's Story

Oakley said that he didn't like the fact that his work is being used for such nefarious purposes. The idea of anyone intentionally making it seem that Coronavirus is an Asian plot is terrible, in Oakley's opinion. It makes it seem like they're placing the blame on Asia, and for him, that is disgusting.

Oakley explained his stance, stating the absurdity of someone coughing into the box and later revolving into a scary disease is not feasible.

In the episode, the infected package suggests that the virus survived six to eight weeks. Oakley said this is all cartoonish, and all made to be silly and scary.

It was not meant to have any bad associations along with it. The virus was also depicted like it was a cartoon character in red dots and green smoke. It is obviously not how the Coronavirus works. For it to be, the idea of Simpsons Coronavirus is simply unfeasible.

The fictional Osaka Flu does have similarities with the Coronavirus. The Independent notes that Coronavirus originated in Wuhan, China. That is about 2000 km away from Osaka, a Japanese city.

The Simpsons episode is not the only show used to intensify the panic around the world. Many people are claiming that there are TV shows and books that have predicted all of this from happening.

Dean Koontz's 2008 book Eyes of Darkness went viral for saying an illness will spread globally around "2020". The article from the Independent also noted that the 2011 virus thriller Contagion is becoming one of the most-watched films on the internet.