WATCH: World's Most Hygienic Fare-Dodger Teaches You How to Disinfect When Going for a Ride
Share Tweet Email 0 Comments
NEXT> 'Little Foot' Chimpanzee Like Skeleton Helped With Big Discoveries on Ancient Humans
Friday, March 05, 2021
STAY CONNECTED WITH US

WATCH: World's Most Hygienic Fare-Dodger Teaches You How to Disinfect When Going for a Ride 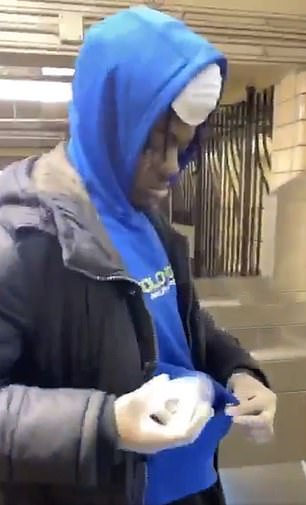 Even a global pandemic like the coronavirus can't stop this man from going out, dodging his subway fare. Filmed in New York City, the subway rider was seen putting on his latex gloves and spraying the rails of the subway ticket machine with disinfectant, before he held the rails as support and jumped on the gate.

The unidentified man was wearing a protective mask, and he was taking the precautionary measures advised by the government as the city battles the spread of coronavirus. There were no other details shared about the video. However, that did not stop the netizens on Twitter from sharing the video which now garnered 55,300 likes, 11,400 shares, and 22 million views.

The video brought laughter and amusement on Twitter users, with some commenting that there is a reason why New York City is the greatest city in the world. There were users who also pointed out how the man displayed proper germ handling after he changed his gloves before he touched the surface of the subway ticket machine. He was also quick enough to disinfect the surface.

Chemicals and bleach are used twice a day and the mixture is wiped down all of the station's surfaces, railings, and turnstiles. There are 472 subway stations in New York City and the local government ensures the public that all of them are being cleaned thoroughly.

There are pictures online that show teams of subway station workers cleaning turnstiles and surfaces with bottles of disinfectants and a couple of white rags. The city is now up at arms after the NYPD Transit Bureau Chief Edward Delatorre has tested positive for the coronavirus.

More cases of the virus reported

Experts have stated that New York City is one of the most vulnerable cities in America right now, as it is the home of millions of people and its crowded streets can be a petri dish for the virus. Governor Andrew Cuomo just announced that the number of people infected in the city just increased to 38%, which is equivalent to 20,875 coronavirus patients.

The Metropolitan Transit Authority is America's largest transit system and they operate the subways and buses of the cities in the country including the Long Island Rail Road and MetroNorth rail systems. On March 13, 2020, they announced that the ridership was down to 19% after Governor Cuomo urged the public to stay home.

Effects of the pandemic

New York is experiencing its first shut down in decades. The Broadway shows were postponed, Times Square is quiet and nearly empty and the Grand Central Terminal saw a drop in commuters as thousands of people decided to stay at home and work from home.

In the coming days, it is predicted that the city will become quieter as schools are shutting down one by one and the bars and restaurants are advised to close down temporarily.

ALSO READ: Drunk Elephants Spotted in a Village in China