Ancient Humans Survived SuperVolcano Eruption 74,000 Years Ago, Can We Survive Now?
Share Tweet Email 0 Comments
NEXT> Creepy! A Wall of Human Bones Discovered Under a Cathedral in Belgium
Tuesday, December 07, 2021
STAY CONNECTED WITH US 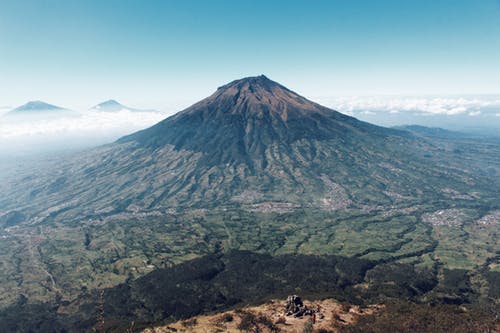 Archaeologists found new evidence that homo sapiens, or modern humans, had already migrated to India when a supervolcano named Toba erupted in Indonesia 74,000 years ago. Archaeologists found stone tools in Dhaba, Northern India, proving that there were humans living in that area before and after the volcanic eruption.

What baffled the experts is the condition of the tools that they found, even though the Toba volcanic eruption should have wiped the area clean of its population, the stone tools remained in good condition, suggesting that ancient Indians survived the catastrophe. The findings were posted on the issue of the journal Nature Communications.

The lead author of the paper, Chris Clarkson from the University of Queensland said in a statement that the ancient Indians in Dhaba were using stone tools that were similar to the tools that were used by homo sapiens in Africa about 80,000 years ago. It is notable that the stone tools did not disappear and that it was still in great shape after the Toba supervolcano eruption and it indicates that human populations at that time survived the catastrophe and they continued to make stone tools to help them with their everyday life.

The Toba supervolcano eruption was 5,000 times larger than the Mount St. Helens eruption, and there has been a lot of controversy surrounding its aftermath and how it affected Earth. There were some scientists who stated that the eruption that happened 74,000 years ago caused winter-like conditions for 6 to 19 years and a cold climate for 1,000 years after it spewed massive amounts of ash into the Earth's atmosphere. They also believe that the change in the climate almost resulted in the extinction of Homo sapiens.

But there were archaeological evidence from India, Africa and Asia that showed that the Toba volcano eruption did not have a severe impact on the ancient humans, and the conclusion was supported by the new findings. Clarkson said in another statement that a prominent theory suggests that few human survivors in Africa were able to cope with the aftermath of the catastrophe by developing more sophisticated symbolic, economic and social strategies. That change and development enabled them to repopulate successfully in Africa and then migrate to Asia, Europe and Sahul around 60,000 years ago.

In Sumatra, archaeologists found teeth of Homo sapiens which dated back to 73,000 years ago. This finding showed that ancient humans were living in Sumatra in a rainforest environment after the Toba volcano eruption. Although the super-eruption is still considered as a colossal event, this catastrophe may only have had a minor impact on the human population back then, especially for those who were in India at that time.

The bottom line is, sturdy stone tools were able to survive the natural disaster, and there were indications that ancient humans continued living in the area even after the volcano erupted.

ALSO READ: Over 200 Earthquakes Recorded Around Yellowstone Supervolcano, Is it Erupting Soon?