We see stones everywhere, and they are usually ignored. Although most people see it as a part of pavements, beaches, parks, and gardens, Japanese artist Akie Nakata saw it as a material to showcase her drawing and painting skills. Akie Nakata, also known as the Stone Artist, has been drawing and painting adorable animals on neatly shaped stones since 2010, and through the years she has built an impressive art collection.

Akie has the talent to turn stones and rocks that she found into amazing animal paintings that you can fit in the palm of your hands. Her art is inspired by the natural shapes of each stone and rock that she sees.
According to Akie, she chooses the ones that she believes have their own destined characters. Since she was a child, she has taught herself how to draw and paint and she loved collecting stones and rocks.

In 2011, she began painting and drawing on stones and she got the idea while walking along a riverbank. She told My Modern Met that she encountered a pebble that looked like a rabbit, and that was when her idea was started.

Akie believes that stones have their own intentions, and she considers her encounters with stones and rocks as cues to go and paint what she sees on them. 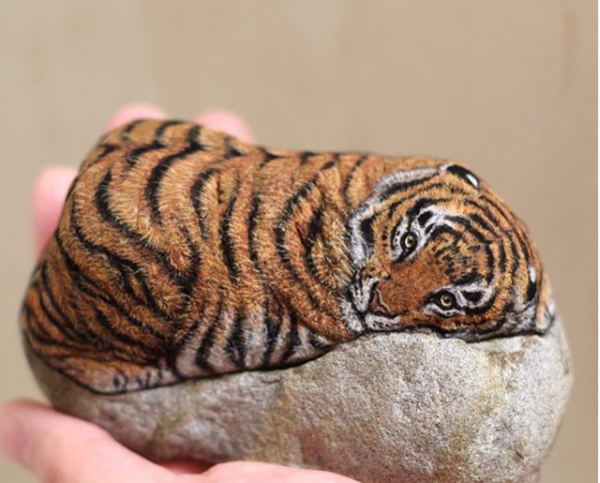 How she does it

After choosing stones that are animal-shaped, Akie assesses the characters that she wants to draw on them. She asks herself about the positioning of the backbone, if the drawing feels right and if she is forcing the shape of the stone to the animal that she has in mind. She then paints the surfaces of the stone or rock with acrylic paint. From dogs and cats to mice, rabbits, and owls, each of her stone animals looks lifelike.

Akie paints the eyes last because she considers her work complete as soon as she sees the eyes. She stated that for her, completing her work is not about how much detail she draws but whether she feels the life in the stone. Akie makes sure that she keeps the original shape of the rock, she does not grind nor smooth them because she wants to stay true to the stone that inspired her to draw and paint.

Akie told Bored Panda "In my encounters with the stones and in my art, I respect my opposites, so I never process stones and would never cut off an edge to alter the shape. The art I want to create is a life newly born in my hands through my dialogue with the stone. I want to paint the life I feel inside the stone. I consider my work completed only when I see that the eyes are now alive and looking back straight at me. To me, completing a piece of work is not about how much detail I draw, but whether I feel the life in the stone."

Unfortunately, her stones are not for sale because she wants the viewers of her art to just enjoy the images. You can follow her on Instagram to see her complete collection.

ALSO READ: An Artist Moves on from Painful Break-Up by Creating His Own 'Boyfriend'