Some interesting things about Budweiser.

Budweiser is a popular beer brand and is also amongst the top selling brands in America.

Here are some fascinating facts about your favorite beer brand, Budweiser:

1. At the age of 21 years, Adolphus Busch, started business as a partner with a brewing supply business, which was owned by Eberhard Anheuser. Busch fell in love with Anheuser's daughter Lilly Anheuser. And, it was after the death of Mr. Anheuser, he took over as the president of the company and renamed it Anheuser-Busch.

2. Things were not so good at the point when the partnership began as the beer was terrible. Thus, Busch along with Carl Conrad, a local restaurant owner, tweaked the beer recipe to make it a refreshing lager.

3. Busch was inspired by the pale lager brewed in the Czech region in Bohemia and when the Budweiser Bohemian Lager was launched in 1876, Americans saw a new side of beer.

4. Adolphus Busch named the beer Budweiser after the Czech region Budweis and the meaning of Budweiser is "of the Budweis."

5. Europe knows the Budweiser as Bud due to disputes with the Czech and German brewers, which prohibits the company is prohibited from marketing in Europe using the Budweiser name.

6. Budweiser was ahead of its time as it dared to introduce the lighter lagers at a time when the Americans were into darker ales.

7. When the founder of Budweiser came up with the idea of national distribution of beer, the company had built a network of 850 refrigerated car rails, ice houses and also storage depots to ensure that the operators could keep on reloading ice to keep the beer cool.

8. The year 1864 saw the invention of the method of pasteurization. And even before it was used to disinfect milk, it was used for the pasteurization of beer by Busch. Anheuser-Busch was also the first brewer to use this method in the United States.

9. Busch had a fascination for pop culture and in the year 1903, his company commissioned the song "Under the Anheuser Bush," which was recorded by Vaudeville star Billy Murray. The song was used in the marketing campaigns for decades later.

10. It was in 1933, that August Busch, Sr. received the first team of Clydesdales as a celebratory gift for the end of Prohibition, from August A. Busch, Jr. and Adolphus Busch III.

11. The company has strict rules and requirements that is followed for selecting the prospective Clydesdales. This includes that the horse will have a height of 72 inches, will have black mane and tail, but their blaze and legs will have to be white.

12. Inspite of the strictness shown in selecting the Clydesdales, the company has a team of 250 Clydesdales.

13. President Franklin Delano Roosevelt was sent the first cases of beer in Washington DC and it was the Budweiser Clydesdales, which delivered the parcel.

14. George Guy, the owner of Maryland's Guy Distributing convinced the officials at Anheuser-Busch to have 10-ounce cans as he was having a tough time selling Budweiser due to its higher cost as compared to the local rivals. Thus, the 10 ounce cans were launched and it became a hit with the locals during the 1950s.

15. In 1982, Anheuser-Busch launched the Budweise Light to counter competition in the light beer segment. The year 2001 saw the Bud Light rising to the number one spot. 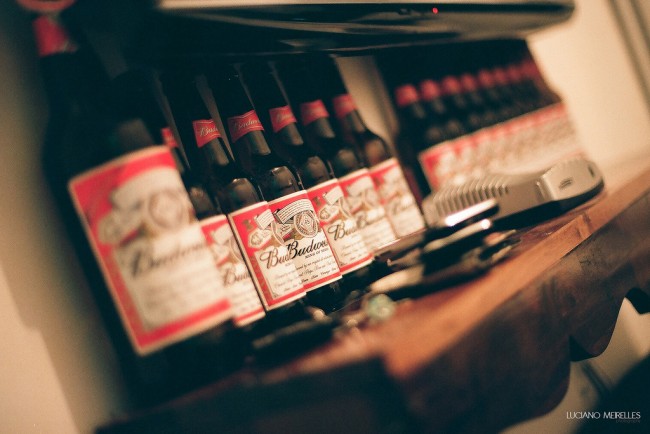 18. In the year 1967 that the Budweiser Clydesdales was commercially aired and since 1986, the Clydesdales has been an essential element of the American Super Bowl.

19. Anheuser-Busch spends heavily in its marketing strategies and specially the American Super Bowl. The commercials aired between the years 2002 to 2011 saw the company spending $246.2 million.

20. For a brief time span, in the year 1983, Budweiser had its own video game, called "Tapper." The game required the player to play bartender, serving beer to jocks, cowboy, as well as, aliens and it was developed by Bally Midway.

21. It was after 150 years of production that Anheuser-Busch revealed the five ingredients, which are used to brew the beer. The ingredients were rice, barley malt, eater, yeast and hops.

22. The smooth and crisp flavor of the Budweiser beer comes from the use of rice. It is an essential element and has been so since the time of Adolphus Busch as till date, the company uses the same ingredients.

23. Apart from rice, the yeast also plays an important role in the taste of beer. The yeast that is used for brewing the Budweiser beer even today has descended from the original culture that Adolphus Busch used. And, it is shipped weekly to make sure that the brew tastes just the same.

24. "Beechwood-aged" beer does not mean that beechwood is an ingredient that goes into the process of making beer.

25. Beechwood aging is a process of aging the beer. And it is not used for adding a woody flavor to the beer. The woods are treated so that it does not impart any taste of its own to the beer.

26. September 2015 saw the 13th major redesigning taking place. However, the slogan, "King of Beers" that you will find on any beer bottle or can was coined by Adolphus Busch and is in use till date.

27. A Budweiser bottle or can bears the "Freshest Before" date, unlike most others which bears the manufacturing date. Also, the number of days within which the beer is best to be consumed is 110 days.

28. Budweiser is cheap compared to the other beers in the market as the cost makes up to only 60 percent of what other beers cost.

30. Budweiser was sued by a man named, Richard Overton on claims that the company falsely advertises that women will be attracted when a man is drinking Budweiser as the same did not happen to him.